On Thursday (22 December), Christmas school break officially started in Norway; unofficially it started in early December, with everyone getting ready for the Christmas celebrations. If I – harsh and responsible, having been through the mill of prehistoric Serbian education, in which the teacher was God, the headmaster a whip and literature the Lord’s Prayer – were to have a say – the school has never started here! Speaking of lower grades in which my children are now.

-Iskra, what did you do at school today?

– We watched a movie and rehearsed a show. Tomorrow we’ll go to the elderly people’s home to sing…

At Petra’s class it is even worse.

– We played first and then there was storefri (break), and then we went out and then we played again. We also made pepperkake (Christmas cake with cinnamon).

No wonder that, soon after Petra started first grade, we would make a slip of the tongue and say “kindergarten” instead of “school”. Of course we would, the kids are playing themselves to death out there. Even the merry little fellow who will never grow up – Petra – found this peculiar, but as days went by she got used to it, carrying an ever increasing amount of toys to school with her.

Here a first grade pupil is allowed to bring a parent to school until they get accustomed to the environment, so how would they not be allowed to take a toy with them? The responsible Petra, who has been through the Serbian kindergarten, where a child has the right to cry until they get accustomed to the environment, and through one semester of pre-school, in which there was a “happy Friday”, while the rest of the week the favourite play buddies would have to sit it out at home, never entertained this right of hers. Knowing Petra, she was probably trying to shield her Mommy (me) from fresh tears more than she was being brave in a new environment and in a new language. However, she soon wanted a fluffy key ring that all the children here have, and then another one and then another one, and then the key ring’s elder brother, and then a backpack with junior brothers and then, almost halfway through December and until the school break, she went to school dressed as Santa Claus, as did most of the other kids, carrying the fluffy battalion along with her.

Still, this playful child became literate in Norwegian too; it was literate in Serbian when it arrived. Even though their only assignment in the first weeks of school was to get to know each other, remember each other’s names, say hello to each other and listen to each other while they speak, which is something the Man and I did not know how to react to, in the four weeks that Petra has been going to school she learned to read in Norwegian better than I did in the fourth grade in Serbian. I can still remember the teacher calling me out and my expressionless stutter across the text! How she speaks Norwegian, however, I wouldn’t dare assess, it would be like judging someone’s savvy in molecular biology. I beat her only in mathematics; I guess I didn’t attend the mathematical high school in vain.

This is what Petra’s Norwegian school looks like: in the morning (they are always in the morning shift) the teacher greets pupils in the classroom, shakes everyone’s hand and says things like: “Petra, it is so wonderful to see you”, “Mateo, I am so glad you came” and so on to every single child. Many pupils hug their teacher and she reciprocates. There is no formal address or title, so the children cheer her on with joy: Berit! Berit! And this Berit is all smiles and so cheerful with children, that her job is exclusively to welcome first graders to school each year. After that, they have the Norwegian class, they learn letters, maths, addition and subtraction, music class, art, sports, English, all the while playing a lot, probably not feeling like they have been studying. When Petra once told me about the weather in English, I almost fell over while on a bus.

– Well, the teacher told us! -she snapped at me for being surprised that she would know that.

– No, I’m thrilled, but you never mentioned you were learning English as well.

They do have homework (except in English!), but only due on Fridays, so anything that has to be done at home can easily be spread over the four days.

Right next to the classroom are two or three playrooms, one of which is outfitted with toys, while the other even has table football! The Man and I were wondering if they had a pool table tucked awaysomewhere. Besides all kinds of block sets, mini-kitchen, dolls, there is also a company of toys children brought from home. The first-graders also have friends from higher grades who are there to look after them, read to them, play with them, and watch over them until they fit into the new environment… Afterschool, junior grades go to so-called Aktivitetsskole (AKS) very similar to Serbian extended stay, with a lot of creative work and more playtime! Several male and female teachers are in charge of the AKS, and they play with children outside or inside, dance, or cook in the kitchen…

– Mom, do you know what Espen said, that his hair is like a blanket because he hasn’t combed it in a while!

Kids love everything, the joker Espen and young and pretty Olivia and Ashuba and Sturbjorn and others… because there is no fear, or stress, or punishment.

– And Vilian is the best! – Petra singles him out, while the Man and I are left wondering what could Vilian then be like.

In the sixth grade, where our elder child is, there is not as much play, at least not during classes, which I still haven’t figured out, despite all the mental effort; I don’t know what they are or how long they last. Generally, apart from Norwegian and mathematics, children have English, the second foreign language, or in Iskra’s case, the third – Italian, natural science, social science, then a subject shortly called KRLE which encompasses communications, world religions, spirituality and ethics, then nutrition and health, cooking and, of course, art, sports and music. In all these classes, according to Iskra, there is a lot of discussion and the children are encouraged to have an opinion. For example, for one English homework assignment the kids had to answer questions about tolerance, whether it was easier to forgive or to seek forgiveness and why, what it meant to meet someone halfway, which countries went from being an enemy to becoming an ally in history and the like… The classes are 60 to 90 minutes long, depending on the class, there is no bell except for the start of school and the end of lunch break which is half an hour, while the short breaks are 15 minutes each. I fail to mention the most important thing – there are no marks until the eighth grade which is the beginning of senior elementary school which lasts three years, during which time the children prepare to choose their future professions.

So, apart for the kids being away from home from eight-thirty in the morning to three or four in the afternoon, how else do we know they are at school? Where is the severity, so to say, or some rules that I as a parent will fear so that I know this is school, and not a joke? I have to be in awe, to fear and tremble, I am from Serbia, dude! Well, only these sandwiches that I make in the morning, and the sandwiches are no joke, they have to be made with brown bread!

One of the first official letters that arrived when the kids started school had to do precisely with food, and actually represented official government policy aimed at nurturing a healthy nation (no wonder they are among the highest ranked nations in terms of longevity), but also support to parents. I remember, In Serbia, which has toxic statistics on diseases affecting ever younger people and on aging population, how long I have been insisting that Iskra should take sandwiches from home, while she whined all day how other kids eat at the local bakery, returning food which she only took a bite out of, until I yielded and started giving her money. In Norway it is clear, there is no white bread at school, or candy. Not to mention pastry, because there is no pastry in this country, or bakeries, except for one in the city centre where you can buy an empty croissant and a few kinds of sweet bread rolls with dry fruit. You can also find cooked or grilled hot dogs at stands selling transport tickets, newspapers and soda. Still, despite the resemblance of choice, the children in lower school (up to and including seventh grade) are not allowed to leave the school yard during classes. So Iskra and Petra eat everything Mom has made, including sandwiches, milk, fruit and cheese…

And what are the other strict rules? When school starts, the teacher brings in a bucket where the children have to leave their mobile phones, which are returned to them at the end of school for the day and which they can only use once out of the school yard. As we live across the street from school, and Iskra has the habit from Serbia to call Mom after school, not so much to say that school is over, but rather to ask if she can go for a walk in Prince Milos Street or to play near the Cultural Centre, here the conversation looks like this:

– Great, can you pick up your sister?

And in the end, one more, perhaps the most important rule of all – child’s happiness comes first, or, in Norwegian: a dirty barefooted child is a happy little man!

Petra goes to school dressed after the latest fashion, while her parents carry a full bag of accessories which she will put over her “civvies” on the way out. Only the Serbian parents carry this additional equipment, that is only the Man and myself, in order to wash it, while most Norwegians don’t even take it home on Fridays. Due to our learned reflex of considering cleanliness to be next to godliness (though everyone here lives as long as a tortoise, thank God!) this “outside” set which includes a coat and boots goes to the washing machine every day. However, the other day her panties also ended up in the washing, because the mud penetrated her ski trousers and tights!

– Well, Mom, we played in the brown snow! – Petra defended herself against my grumpiness when I said that there was no snow and that I could not comprehend where or for how long she had been sitting if her panties were also dirty and not just wet.

A child that wallows around, plays and sits wherever it wants is a law of nature in Norway, not a matter of upbringing, permissions or restrictions. A child in dirty clothes is a healthy child, a being which lives its life to the full. And if it is also barefoot!! Though it is hard to find a child in shoes here, not only at school or at home, but also outside in the yard in the summer… I don’t know what kind of primordial love draws the children to mud, water and sand but our Petra is the star of Peppa Pig and Muddy Puddles. And I am the desperate mom from the TV commercial whose kids come inside the house covered in mud and leave stains everywhere, but who knows this is only a commercial and that no currently known extraordinary washing powder or a cyber-machine could wash all the dirt off Petra’s little socks and gloves. 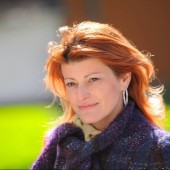